What kind of Macedonia does Bocvarski want?

Yesterday the Mayor of the Municipality of Stip, Blagoj Bocvrski, attended the workshop “What kind of Macedonia do I want?”, organized by CIVIL – Center for Freedom in partnership with the Heinrich Bὅll Foundation from Germany, was stated from the Mayor’s Cabinet.

During the working part of the event, a discussion was opened on the possibilities for citizen participation in the democratic reforms at the local and national level, and special attention was given to green initiatives and strategies, as well as to questions relating to the promotion and practice of European values and green alternatives, ahead of Macedonia’s EU integration processes.

“The debate and being involved in debates is very important for us, for the Municipality of Stip, for the citizens, because we have all jointly assured that we want to integrate the citizens, to include them in decision-making and to familiarize them as much as possible on what we do as their elected representatives. This is precisely why I would like to inform all the participants on how the Municipality of Stip is making changes in the manner of its functioning and work by what we do and by participating in various debates and discussions. To this moment, I have realized over 1400 meetings with citizens in my office in the past six months. We are looking for ways to better hear the voice of the citizens. Therefore, this debate is also a nice opportunity to hear the opinions of representatives of the civil sector as well, and of political parties, if they attend, and of all those who show interest to this way of communicating and of sharing views”, highlighted Mayor Bocvarski. 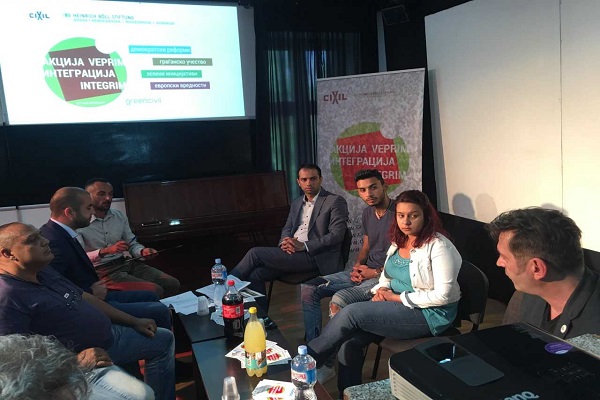 “I would like to extend my gratitude to the Mayor of the Municipality of Stip, for his presence today. This workshop, as well as the project Action – Integration, has the purpose of exploring the possibilities and requests and needs of the municipalities, such as Stip. Stip is the first city we have come to, because it is important for us as a civil society, as it is one of the most open-minded regions in Republic of Macedonia, and it is an open Municipality, a Municipality open for citizen participation, a Municipality open for democratic reforms in the true sense of the word, as well as for promotion of European values. European values are important for Macedonia on our path to Europe, and is something that we want to see how it is being realized on the ground. I think that in Stip there are excellent grounds for realization of these projects, because the Mayor and his cabinet are open for cooperation”, pointed out Xhabir Deralla from CIVIL.

During the debate, Mayor Bocvarski spoke about recent projects and realized promises, such as the gasification of the Municipality of Stip, the reduction of the price of drinking water, the design and construction of a kindergarten, the finishing design of the dam on the river Otinje, infrastructure work on the territory of the Municipality of Stip, providing a water supply line and finally bringing clean drinking water for the residence in the settlements of Balkanska, Makedonka and Chardaklia, cleaning of channels for draining of rainwater, providing free stay in kindergartens for children of single parents, the action “Spring cleaning of the city”, promoting the measure – a small group home, free parking, initiative for forming a Solidarity Fund, a debate for traffic solutions, a debate for developing the Budget of the Municipality of Stip for 2018, and preparations for a shelter for homeless animals.

Stip is ready for Europe