The Constitutional Court annulled the Referendum in Dojran. The decision for annulling last year’s referendum is found in No.117 of the Official Gazette of Republic of Macedonia from June 26.

The citizens of Dojran voted against the opening of the Kazandol mine, and also other mines on the territory of the municipality. 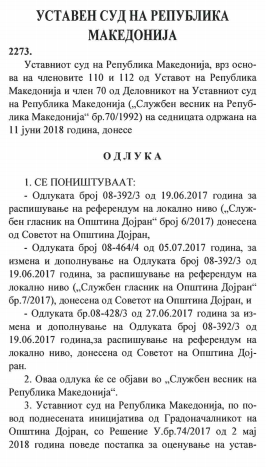 Activists of Save Gevgelia are reacting on the social networks with criticism against the highest judges, who according to them are joining the plan for “genocide” of 400,000 Macedonians.

The lawfulness of the Referendum on Kazandol was set as a point before the Constitutional Court by the former mayors of Dojran and Valandovo, Borce Stamov and Nikolce Churlinovski, who refused to sign the decisions for holding a referendum, claiming they had no competence for such decisions.

The initiator of the initiative was the former mayor of the Municipality of Valandovo, Nikolce Churlinovski. The referendum was part of the initiative Save Valandovo, which after three months of attempts for its scheduling, it was finally held on August 20, but was not successful as there was an insufficient turnout.